I’ll get straight to the point: traveling to Syracuse for #140Cuse was worth it in every way!

The idea of the #140conf was created by Jeff Pulver, one of the creators of Vonage. At these conferences, they discuss “The State of NOW,” which covers how people are utilizing social media to help their cause. People give 10-minute talks, regardless of how famous they are or what order they are in the program. This makes for fun, exciting, and informative presentations.

Now I had heard about #140Cuse for a while but I was not entirely sure WHAT it was or how it was organized. That was until two RIT professors, Vic Perotti and Mike Johansson, approached me about speaking at a social media conference held at RIT. That’s when I found out it was called #140RIT and I would be giving a 10-minute talk. This was when my heart started to race with excitement. On April 10th, #140RIT was held. This was where I got to meet Mr. Pulver, Anthony Rotolo, a popular professor at Syracuse University, David Rosen, the coordinator of #140Cuse, as well as a number of students and faculty from Syracuse and RIT. After the butterflies had calmed down, I talked about how colleges are starting to utilize social media both in and out of the classroom, using RIT as the main example (link here). Once it was done, people seemed to enjoy it and they recommended that I go to Syracuse on the 19th. I happily said yes! 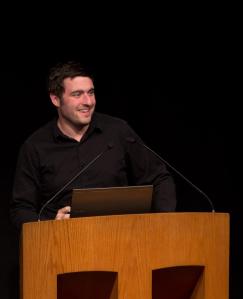 Me speaking at #140RIT. What an awesome opportunity!

When the day arrived, I met up with my friend Erin and my former boss Amanda and we sat to enjoy the conference. The list of people on the speaker list was incredible! So before I even sat down and started to network over Twitter, I had high expectations. Then the speakers came out and absolutely blew me away! Here are a lot that caught my attention and my favorites are in bold:

And while all of this was going on, I was networking with plenty of other people over Twitter. Thanks to the hashtag and the uStream, #140Cuse was nationally trending and thousands upon thousands of other people were impacted all across not only the United States, but the world! I gained a lot of new followers and I loved to talk to every one of them as the day progressed. A brand new community was born, and all that was needed was a phone or computer.

This was an absolutely INCREDIBLE two weeks. I connected with so many people over social media that now I do more people-to-people networking than I ever have before. I learned about the different ways to take social media and that I want to utilize them! Social media is fun. It is something I am passionate about. And I want to use it to better myself, my peers, and the world.

Social media is the now and the future. How are you going to utilize it?

Thank you Syracuse University for hosting such an incredible event. Thank you to all of the speakers for being so inspirational and touching me in one way or another. Thank you to the faculty at RIT for encouraging me to try social media.