Sports Marketing and Social Media News From The 2015 NFL Draft 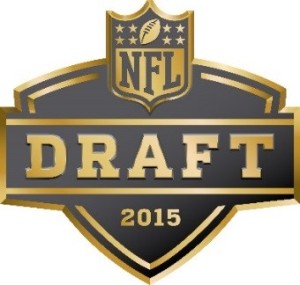 The NFL Draft is this weekend, and a lot is on the line for a number of different teams. Fans, players, & NFL hopefuls will be anxiously awaiting to see where players end up and what teams “win” over the weekend.

Not only do teams have a lot riding on the line, but businesses have a lot at stake too. Companies have already signed players as endorsers for their brands, like Johnny Manziel and others were last year. Sponsors of NFL teams wonder if their teams have drafted the next superstar that will put fans in the seats & get more exposure for their company.

The storylines from the podium in Chicago weren’t the only headlines. A number of marketing storylines came out of this year’s draft as well. With the growing influence of social media and athlete endorsements on buyer behavior, brands tried their best to reach out as much as possible. Here were some of the stories that arose from the 1st Round:

4 Marketing Stories From The NFL Draft

In this draft, it seemed like every 1st Round pick had some sort of professional representation by an agency or had some kind of sponsorship or endorsement deal lined up. More and more companies are taking risks and investing money in these young players that have upside but haven’t even touched the field in their NFL career yet.

Brands have a ton on the line when they make these deals. Players can end up being a huge success or a bust. Companies need to do their research, understand what athletes have the most upside, see which players could be playing in bigger markets and in front of bigger audiences, and then pull the trigger on a deal.

Beats By Dre vs Bose

Yes it was wonderful that Jameis Winston, Marcus Mariota, & Amari Cooper spent the drafts with their families. But it could be the case that Beats had some influence on that decision or when they found out, they got excited. As those three were drafted and had their names called within the top four picks, they answered the phone with headphones from Beats By Dre in their ears. That primetime exposure could be a worthwhile investment for the brand and I’m sure consumers were looking into those.

Now Beats and Bose, the official headphone provider of the NFL, have clashed with athletes before. Tonight, it continued. Bose took to digital to show off athletes wearing personalized headphones that match their new teams. It looked like they gave every athlete that attended the draft a pair. In this effort, they hoped to use the athlete’s online celebrity to spread the news of their product. So while Bose shared more digitally, Beats may have shown that this weekend, less was more.

Nike and Adidas have been duking it out for years across many different sports, with soccer and football being the most notable. Tonight, they tried to do everything they could to show off their new endorsers.

Nike, like Beats, had Winston, Mariota, and Cooper, along with Leonard Williams & Todd Gurley. Once those first four were drafted, tweets were sent directing readers to their online catalog where they could purchase the new jerseys. The best part? It was simply done. A picture of the player, another picture of the team’s logo, and a link to their website. Simple, yet effective.

Adidas took a more creative approach. Players like Kevin White, DeVante Parker, Trae Waynes, Marcus Peters, Nelson Agholor, & Phillip Dorsett were under their umbrella. When they were drafted, they were given custom photos with the team colors & names. Also, they used the celebrity of Snoop Dogg to congratulate some of their players. While they may not be big names like the ones that Nike has, they have a ton of upside. Plus, all of them play an exciting game. If they perform well, the sky is the limit.

Tide Gets Lots of Unoriginal Exposure

Tide was very active on Twitter during the NFL Draft. After every player was drafted, that player tweeted out a photo of them holding their jersey and tweeted it to @TideNFL. They then shared that tweet out. On top of that, each player, under the hashtag #OurColors, shared a photo with the colors of the team they would be playing for.

Now, while that was done a lot, each player’s tweet… was essentially Exactly. The. Same. Also, when Tide tweeted the players, they did not put anything in front of their names so it’s hidden on their timeline. They essentially paid players to allow them to post a tweet on their profile and the tweets were unoriginal. Not a fan here.

The marketing stories will be interesting to track in the months to come and as the season develops. Some brands will make money. Others might not hit the mark. Only time will tell to see if the best player out of this class is a 1st Round stud, or a 6th Round filler pick.

Here are some reactions over social media from businesses over the picks. Enjoy! Thanks for reading and feel free to follow me for more sports news.

Tailor made for the next level. The Jameis Winston @TBBuccaneers NFL Game Jersey http://t.co/1f1q7QGShR pic.twitter.com/hnpO89Y2EX

#1 for a reason. Welcome to the next level @jaboowins. pic.twitter.com/0PYyFa5JOw

Congrats, #MarcusMariota. Wherever you go, we go with you. pic.twitter.com/7a0XVZmUjn

“A dream come true.” That’s what it means to @dantefowler to be taken number 3 overall by the @Jaguars. #NFLDraft pic.twitter.com/iwWdmPSZY7

With the 15th pick in the 2015 #NFLDraft… pic.twitter.com/CoHzsEsoK3

Hard work was instilled in @Melvingordon25 at a young age. He takes that with him to the @Chargers. #BetterNeverQuits pic.twitter.com/BTLUhxuItI