In January 2015, I conducted a small survey to figure out who the biggest names in American sports were. At the time, it was done to show the impact that Derek Jeter had on baseball in his last season and how the Yankees, sports media, and brands had done a great job of celebrating him. On top of that, it was to show how baseball might have an issue filling the void in having a superstar.

This year, I wanted to do the same thing with no specific mission in mind. Who are the biggest names in major American sports? Who are the athletes that brands can use as endorsers for products? Who are the stars that the public and the media gravitate to?

This focuses on MLB. Last year, Jeter dominated the attention around baseball all the way until his retirement. Would his name still carry weight? Or will a young star take his place?

THE BIGGEST NAMES IN BASEBALL 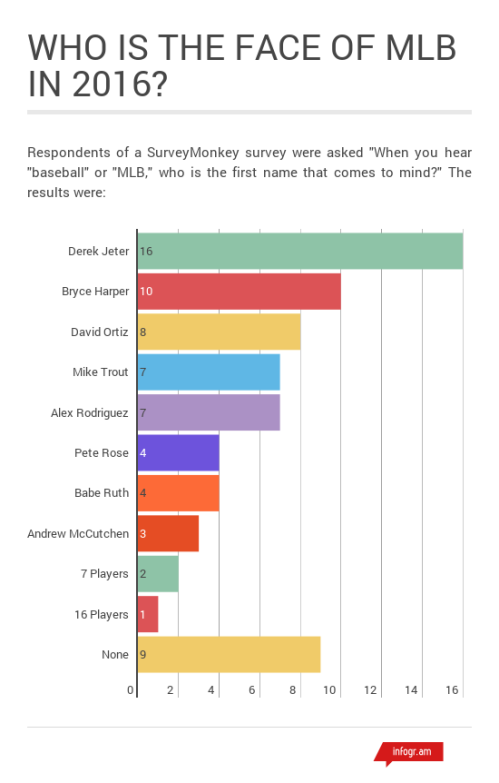 Once one of the greatest players in baseball, Alex Rodriguez’s PED issues on the biggest stage come at a price, causing his stock to drop immensely in the public eye. Last season, he returned from suspension and was arguably the Yankees’ best hitter all season, bringing his stock back up a little bit. Thanks to this, don’t be surprised if he’s used more and more for endorsements, like he was before his suspension.

One of the best young talents in baseball, Trout is the fastest player in baseball to reach 100 home runs and 100 steals. His exciting plays at the plate and in the field have made him exciting to watch and the most popular (according to this) out west. As his career grows and playoff appearances potentially come, his brand will become even bigger and his popularity will grow even more.

As he nears the tail end of his career, Ortiz is the face of one of the biggest teams in all of sports. Because of that as well as his postseason heroics, he is well-known by many people in the baseball world. His brand is known nation-wide and will continue to be for as long as he is still playing.

Unapologetic, exciting, and full of potential, Bryce Harper had an incredible 2015. The youngest All-Star ever, Harper is one of the faces of the new era of baseball, hoping to bring some character and excitement to what could be seen as a boring sport. Brands like Gatorade feature him in ads and endorsements regularly, and as he continues to dominate, his star power will only go up.

One of the best to ever do it in the last 20th and 21st century, Jeter helped to captain the Bronx Bombers to 5 World Series titles in his career. Jeter is respected by many not only because of what he accomplished, but because of how he did it (not caught doing PEDs in the steroid age of baseball). As a result, his legacy is still strong, and brands like Nike know it. People won’t be forgetting about Jeter anytime soon.

If you shine in one of the big markets (New York, Boston, Los Angeles), you’re more likely to be known by the casual baseball fan than most players.

Pitchers were not featured in the Top 5. Unless there is a monumental postseason performance (a la Madison Bumgarner in 2014), the lack of playing every day decreases your popularity compared to everyday players.